‘We will continue to support and raise Tibet in Swiss Parliament, never give up,’ Swiss MP Lisa Mazzone to Tibetan Peace Marchers 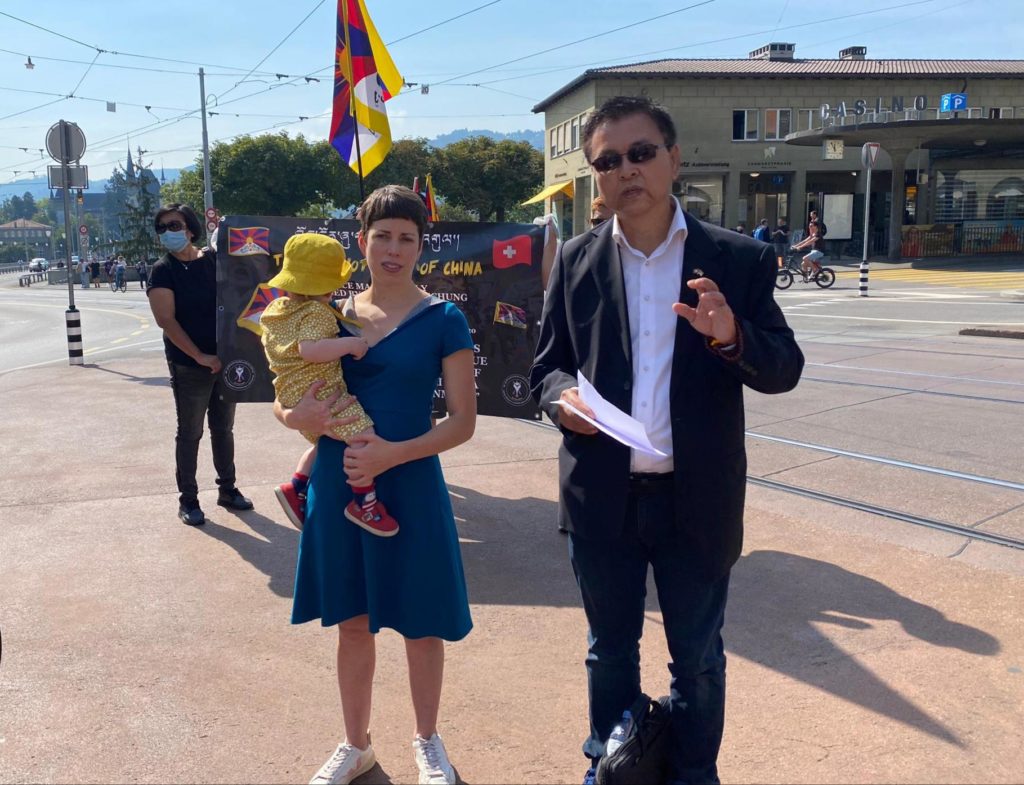 Ms. Lisa Massone addressing the Peace Marchers and being translated by Lobsang Shitsetsang, Executive member of Tibetan Community of Switzerland and Lichtenstein.

Geneva: The Tibetan peace marchers, walking from Zurich to Geneva reached Bern, the capital of Switzerland today on 11 September 2020. The peace marchers were welcomed by the Tibetan community of Bern and commended them for their initiative.

Ms. Lisa Mazzone, member of Council of States, the upper chamber of Swiss Parliament and Vice-President of the Green Party- Switzerland welcomed peace marchers at Casino Platz, Bern. Calling the peace-march an “initiative for peace” Ms. Mazzone said that, “it is very important to fight for the rights of the Tibetan people which has to be respected. We should never give up and keep fighting for the Tibet and the rightsof the Tibetan people.”

She further raised serious concerns about the alarming situation in China, especially in Tibet, East Turkestan and Hong Kong and said that the current situation is driven by the repressive policies of China. Ms. Mazzone is also an active member of the Swiss Parliamentary Group for Tibet.

Wishing the peace marchers success, she said, “we from the parliament group will continue working for Tibet. I urge Tibetans to continue their fight for Tibet and I assure you to come again and support you.” 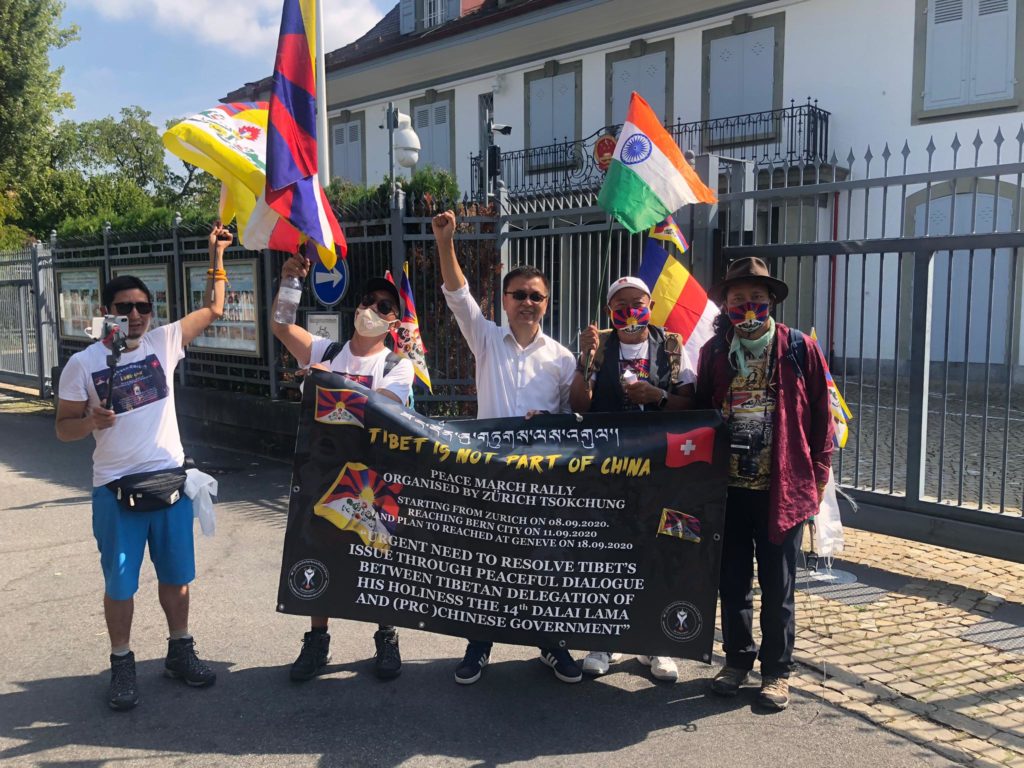 Tibetan Peace Marchers in front of the Chinese Embassy in Bern after submitting their petition.

After the gathering, the peace marchers went to the Chinese Embassy in Bern and submitted a petition to the government of China. The petition calls on China to hold genuine talks with His Holiness the Dalai Lama for peaceful resolution of the issue of Tibet.

It reads, “With the growing economic power, China has been trying to assert global leadership. However, to be respected and commended as a leader in true sense, China needs to step up and act according to the fundamental values that guide humanity. The global image that China is trying to portray as the next global leader will be shallow if it continues to suppress the Tibetans who are seeking justice and dignity as human beings. Despite six decades of China’s rule, the voice of the Tibetans is growing and so is the support for peaceful resolution of the issue of Tibet. Therefore, the only way forward would be to engage in genuine and effective dialogues with the envoys of His Holiness the Dalai Lama and resolve the issue of Tibet peacefully.”

The peace marchers are now on their way to Geneva, home to United Nations and other important international organizations. They are expected to reach Geneva on 18 September 2020 coinciding with the demonstration by the Tibetan community of Switzerland and Liechtenstein before the United Nations building while the 45th UN Human Rights Council will be in session.

The Tibetan Community of Zurich organized this peace march from Zurich to Geneva via Bern starting from 8 September 2020 and arriving in Geneva on 18 September 2020. The peace march will cover around 300 kms with the objective to appeal the Federal Government of Switzerland and the United Nations to hold China accountable for the egregious human rights violations being carried out in Tibet and the other territories under the regime of the Chinese government. The peace marchers will submit petitions to the UN, Swiss Federal Government as well as the Chinese Embassies. 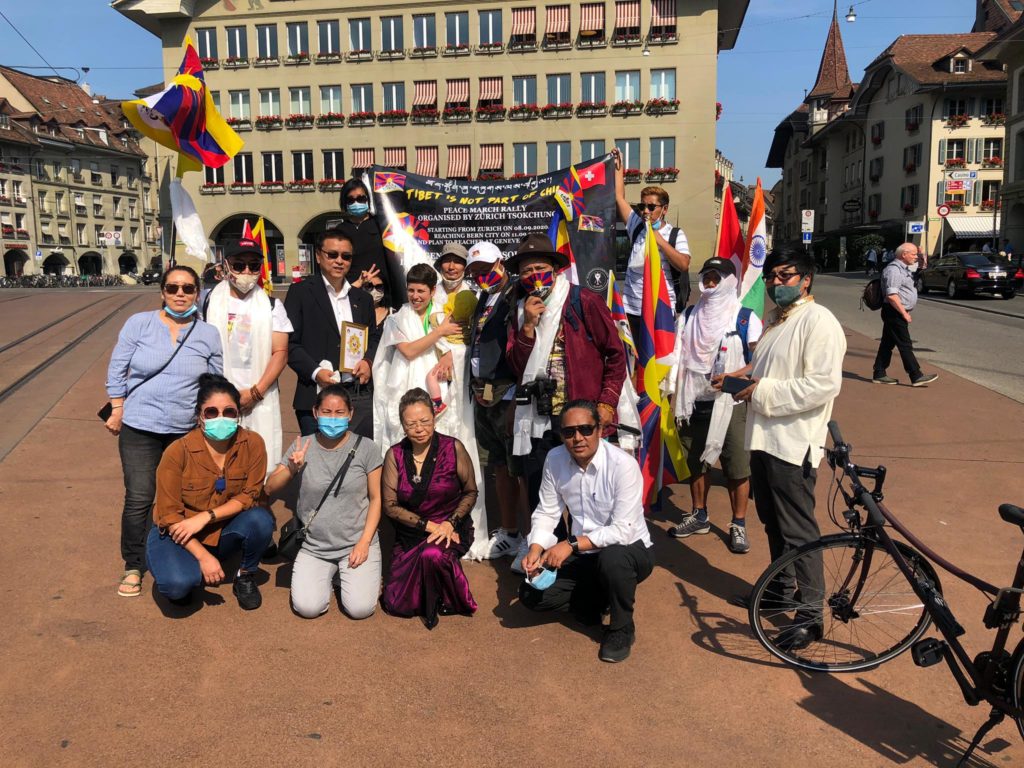