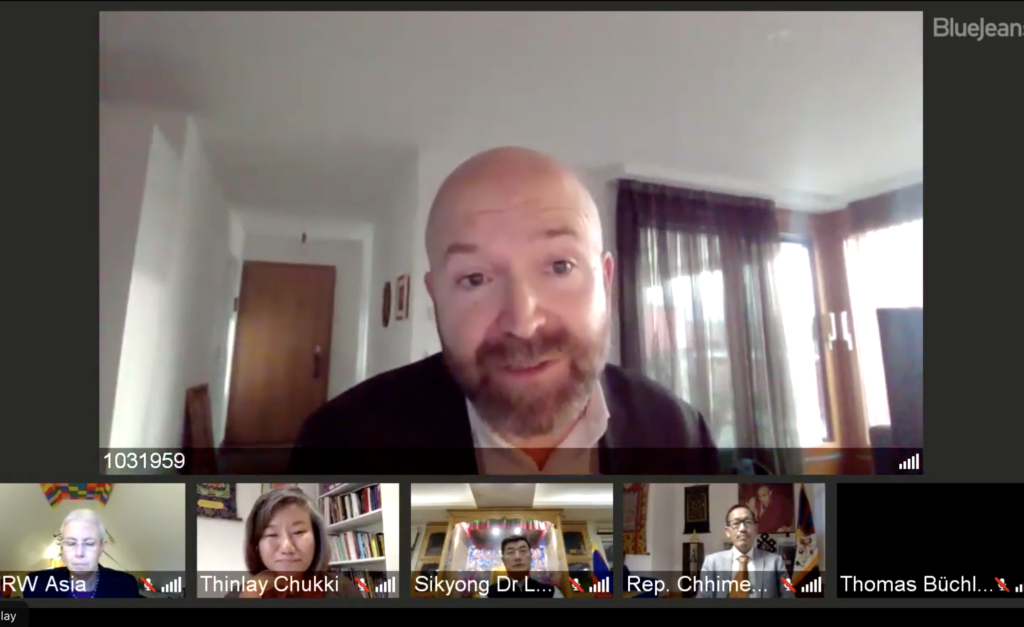 Mr Nicolas Walder, Member of the National Council as well as the Foreign Policy Commission during the closing note of the Geneva Forum 2020. Screengrab image

Geneva: The Foreign Policy Commission under the National Council of Switzerland (Upper-House of Swiss Parliament) has recommended the Swiss Federal Council to submit a detailed report to the Parliament on the implementation of human rights dialogue with China and also on the situation of Tibetans in Switzerland. This decision was made on 9 November 2020 by the Foreign Policy Commission, while deciding on a 2018 petition on the human rights of Tibetans in Switzerland as noted in the press release.

On 10 September 2018 the Society for Threatened Peoples along with the Swiss Tibetan Friendship Association (popularly known as GSTF) had submitted a petition signed by over 11,000 Swiss citizens calling for a more active engagement at international level vis-à-vis China on the human rights situation in Tibet and for the protection of the culture and language of Tibetans; to fully guarantee freedom of expression in Switzerland on the situation in Tibet; to make a firm commitment to respect the freedom of movement of Tibetans by recognizing their status as persons in need of protection and by issuing a passport to persons concerned; and adopt concrete measures to protect the Tibetan community from the surveillance which it is subjected to Switzerland and guarantee respect for private life by intervening, if necessary, with the Chinese authorities. The petition was also supported by the Tibetan Community of Switzerland and Lichtenstein, Tibetan Women’s Association of Switzerland and the Tibetan Youth Association of Europe.

The Foreign Policy Commission consists of 25 National Council Members. The Commission adopted the two postulates after the President’s deciding vote in favour of the postulates when the vote was tied with 12 in favour and 12 against the adoption. The postulate 20.4334 calls upon the Federal Council to submit a report to the Parliament a report on the implementation of the bilateral dialogue between Switzerland and China on human rights and seeks answer to the status, implementation and future plans of the Federal Council on the dialogue process. The other postulate 20.4333 calls upon the Federal Council to submit a detailed report on the “situation of Tibetans in Switzerland, particularly with regard to freedom of expression and surveillance.”

In the recent past, there have been reports of incidents of surveillance and censorship on Tibetans living in Switzerland by the Chinese authorities. This has been the case in New York and Sweden as well.

Mr. Nicolas Walder, Member of the National Council as well as the Foreign Policy Commission during the closing note of the Geneva Forum 2020 stated that “we are asking the Swiss government for a report on the result of the so-called constructive dialogue on human rights since several decades. We want to see what did it bring concerning human rights and obviously, the result is quite bad because we all can see that the situation is worsening for the minorities in China including religious minorities. This is quite a new development because until now business was the priority when talking with China and everybody is a little worried about speaking on human rights. We are quite pleased that now we can openly discuss the policies towards China.” Mr. Nicolas Walder is a strong supporter of human rights in Tibet and is the co-President of the Swiss Parliamentary Support Group for Tibet.

The Tibet Bureau Geneva thanks and congratulates all the important organizations as well as the Swiss Parliamentary Support Group for Tibet on achieving this important milestone and appeal everyone to continue the important work.